Many people have asked us about the Golden Circle company. So here is some info from their website: http://www.goldencircle.com.au/

"Golden Circle began as a grower cooperative in the 1940s with the pineapple cannery commencing production in Northgate in 1947 – initially producing around 40,000 tonnes of canned pineapple annually, in addition to some canned fruit salad, tropical fruit chutneys and fruit juice cordials. Today the Northgate cannery produces over around 180,000 tonnes per year of canned pineapple, fruit juices and cordials.
Pineapples have been at the heart of the Golden Circle brand since its earliest beginnings. It is thought that pineapples were first grown commercially in Queensland in the 1840s. With its rich soils and near perfect growing conditions, Queensland has become synonymous with Australian-grown pineapple. With new techniques such as Living Mulch and Conservation Tillage producing benefits such as reduced soil erosion, improved soil structure and less fuel usage, Golden Circle products are also minimising their impact on the environment.
Golden Circle was acquired by Heinz Australia in 2008, allowing for additional investment in new product development and marketing."

Woombye, Queensland – this 16m tall tourist attraction on the Sunshine Coast is the most well-known Australian ‘Big Pineapple’ and was opened in 1971.
Gympie, Queensland – had a ‘Big Pineapple’ on top of a disused petrol station until it was demolished in 2008.
Ballina, NSW – has a small ‘Big Pineapple’ in front of a petrol station.
The Hawaiian Pineapple Co - erected an over-12m tall pineapple shaped water tower over the cannery building in Honolulu in 1928, but sadly it was dismantled in the 1990s.
South Africa - has a 16.7m fibreglass Big Pineapple containing a gift shop. 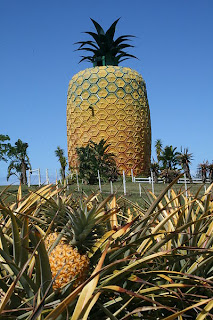 The Big Pineapple, between Port Alfred and Bathurst on the R67 in the Eastern Cape, South Africa, photo:
http://en.wikipedia.org/wiki/File:Eastern_Cape-Big_Pineapple-001.jpg